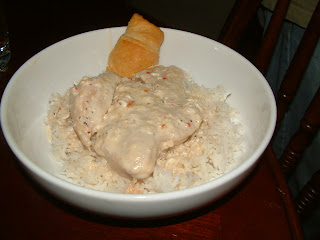 This might not look too spectacular, but trust me this was some of the best chicken and sauce we have had! And it's super easy to make and only takes four ingredients! Can't beat that!

Toss all of that in a slow cooker and put it on low for four-five hours. We served it over rice, because it makes the most amazing sauce. 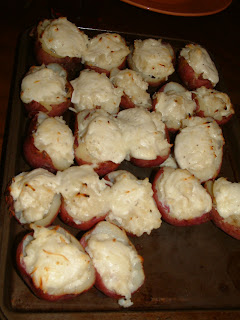 These potatoes are a spin off of Pioneer Woman's fluffy new potatoes. I just changed it up a bit.

Directions:
Boil or bake your potatoes till they are almost cooked. I did both, I boiled them for about 15 minutes (mine were HUGE) and then baked them in the oven for 10 minutes. I then sliced them in half and scooped out most of the filling. You have to be careful here, because you want to leave a little bit of potato in the skin so it can hold the mashed potato mixture.
I melted the butter and cream cheese together, and then added the sour cream and salt and pepper. I mashed the insides of the potatoes with about half, maybe a little more of the butter and cream cheese mix.
Put the potato mixture back into the skins and then I spooned a little more of the cream cheese/butter/sour cream mix onto the potatoes. Then I topped it with a little mozzarella.
Bake at 400 for 20 minutes, or until the cheese is a little golden.

I got several comments saying these were the best potatoes EVER!!!

Email ThisBlogThis!Share to TwitterShare to FacebookShare to Pinterest
Labels: potatoes, side dish

Slow Cooker Chicken that doesn't have a name...yet 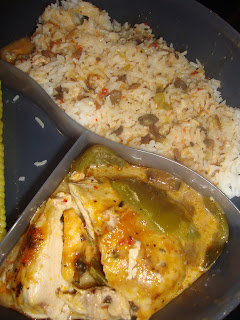 Put the chicken in your slow cooker. Put the soup through chicken stock over the chicken. Cook on low for 4-5 hours. You have to watch it because the chicken can easily overcook! When it's done, stir in the heavy cream. Serve over rice! 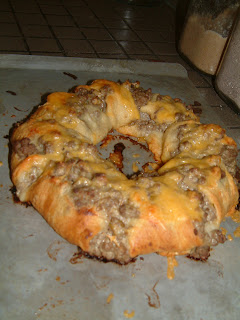 This is so good! It's also very easy to make which makes it VERY good!

2. Brown your meat with the green chiles. Stir in the taco seasoning.

3. Drain the grease and then stir in your cheese and sour cream.

4. Unroll crescent rolls and separate. Arrange triangles in a circle on a greased baking sheet with wide ends overlapping in center and points toward the outside. There should be about a 5 inch diameter in the center.
Scoop meat mixture evenly onto widest ends of dough at center of ring. Bring points in and over and tuck underneath the wide end.

Ashley E.
I am a mid twenties stay at home mom to a beautiful little girl named Addison! My husband is currently saving the world, one cancer cell at a time. We have one little furry child named Dixie who was our baby before Addi, and now she is having an existential meltdown because she is no longer the center of attention. I love cooking, reading, planning parties, girly things for my girly girl, my amazing family and friends and trashy reality TV!